My unit’s technical name is N16W19, but I like to use nicknames. My pit crew of Josh, Lisa, Thomas, and myself decided that we would name our units (we each have a 1m X 1m unit to excavate within the group’s larger 2m X 2m unit) after the first thing that we found in it. Much to capitalistic Josh’s dismay, as a pit crew, we are supposed to be quite egalitarian and help one another out in order to ensure that as we excavate down the larger overall unit is always at the same level, for mapping where artifacts were found in relation to each other, photographing the various levels in the stratigraphy and essentially obtaining a greater understanding of what was occurring in the location. Which is why Lisa actually found the bottle cap in my unit because I was behind. (I guess I should have done some trowel training before coming up here). The first artifact of KdVo-6 excavations for 2013: a historic bottle cap. According to Norm, this is potentially from the army occupation in 1942-1943. So that was quite cool. I mean, lucky for Lisa, no big deal, it’s ok but that that girl had to go and find a valve head from a tire in my unit too! And that was just too much, I tell you. (Kidding of course, as Lisa is far too amiable for me to be upset at her).

Plus I later found old film—I probably got too excited about that one but Norm said maybe it could be developed and then I got much too excited only to later have all my hopes and dreams crushed as it appears to be not in good enough condition for that. However, still a neat find, I think. And I have the Munsell colour chart to thank for finding the film because if Norm had been explaining a more interesting subject, I may have been more engaged and not spent enough time staring into my unit to see the tiny curl of glossy black: the end of the film. (Not that Munsell colours aren't very important). 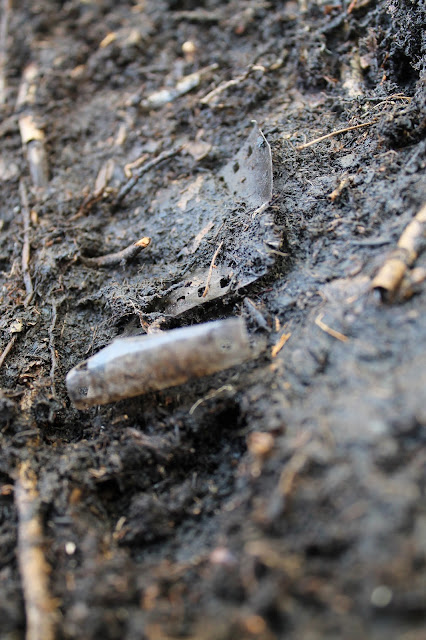 Other things found and learned today as a pit crew:
1. Other historic items found: 2 more bottle caps, 1 wooden stake, 1 charcoaled piece of wood, various wood pieces that may indicate some sort of structure, 3 inchworms, and at least a couple spiders.
2. Things not found: a wire.
3. Some roots will try to disguise themselves as wire. They are not worth your time to dig around.
4. Lisa is a fast digger.
5. It is possible for dirt to stick to the top of Josh’s nose in such a way to make it appear as though he has a unibrow.
6. Thomas had an early BM this morning. (Joys of all joys, apparently being in a pit crew makes you close enough to start sharing this sort of thing).
7. Roots should be cut, not pulled in order to protect the stratigraphic layers. So you will spend a considerable amount of time doing guess what? Cutting roots.
8. Use the flat blade of your trowel. The backside is a different technique used in certain circumstances but not everyday digging.
9. It’s fun to team up with Thomas and pick on Josh.
10. Duff layer is apparently the term for the humus-rich top layer.
11. After the duff layer comes soil horizon A, which is 10YR something a rather on the Munsell Chart. Reddish black, anyway.
12. After that is a colluvium layer. At least where we’re digging.

Uffda. This is really wordy but stuff has started to happen and you saw how lengthy the posts were before I was even doing anything that interesting.

13. There’s always more digging to do. 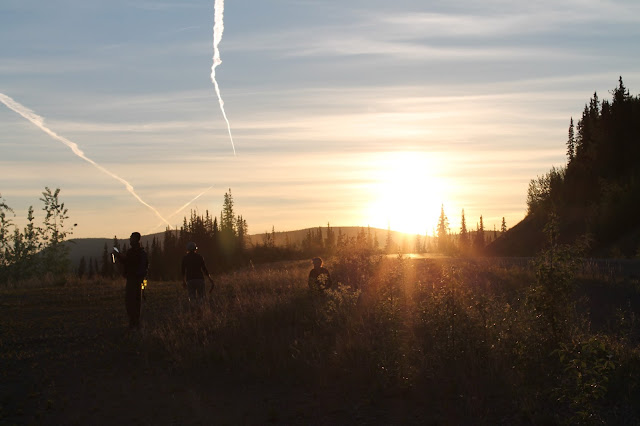 (Stay tuned for what’s under the colluvium layer).
Posted by Kalista at 14:10