Just Another Day at the Office


Today I was on cooking crew, which takes more of your time than one would expect. But I felt really accomplished helping make enough porridge, salmon sandwiches, and lastly chili to feed our small army.

Interspersed between my sessions of slaving over a hot fire (ok, Lisa did most of the work), we did some compass and chain (well, tape measure, that’s just the terminology) work laying out our squares that will become our units to excavate. Oh and I got to do some bailing out of the infamous Pit of Despair; a most fun job. For once I intend absolutely no sarcasm, as I love to have a reason to sport my red rain boots. (For the record, I had mine before Amanda got hers). Gear was moved around, some of our small army worked on building a new gear shed, the outhouse was cleaned, smelly products were bagged, labeled and placed in the security of the van so as to not attract bears, the creek was visited, a couple crazy campers went for a run, the historic icehouse from the building of the Alaska Highway was explored, jokes were made, and of course bug spray was slathered on.

All part of just another day at the office. 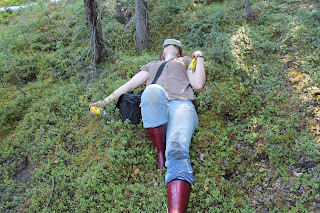