Sleep rarely eludes me. I can count on my digits the number of times I have spent the night tossing and turning. The thunder last night that was remarked upon as loud was something that I slept right through. It is 5:30 in the morning and this time, I’m awake. This is thunder. 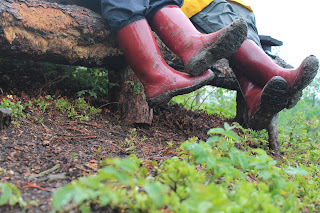 My McKinley “Kluane 3” tent—an inaccurate name meaning whitefish—was covered by an industrious blue tarp three weeks prior when we arrived at the Little John Site KdVo-6. Though I feel glad of this (I do not overly want to test the waterproofing of my tent), the cloudburst that seems like it is occurring right over my head is overstated by the pit-pats that are rain hitting plastic. I think for a moment of peeking out and seeing the true, unenhanced force of the rain, but I cannot be bothered. Besides, the clouds have yelled their anger once more, and the only thing of importance to me, is that it’s loud, loud enough to keep even me awake.

“Tent City” is what we have been calling this portion of the archaeological field camp. We crammed our tents closely together at the beginning. So close that it is possible for me to give a notebook, a bandanna, or perhaps a camera from my tent to the owner of the nearest tent to me without ever leaving, save for sticking my hand out to pass on the desired item. It was even more packed before. One tent has been removed.

At our arrival, I feared bears but I will pretend as though it was for the practicality of using one large blue tarp over an amalgamation of tents that I placed my temporary home so near the others. “City” is a term that when you’re in an isolate of civilization, approximately fifteen people in the bush, and a bumpy, twenty-minute drive from the nearest town of perhaps eighty people, means only four tents. Tents apart from Tent City are quite near to us as well, but most of these have individual tarps, a tedious project but necessary to work around the labyrinth of trees.

Camping like this is strange to me. Not the tarps or the closeness so much as the lack of clearing—wedging even small tents into the limited spaces had been difficult. Some people took the time to remove stumps, add moss to their sleeping surface. For my part it seemed unnecessary, it is the first time that I have camped on the layer of decaying trees and forming organic soil that covers the ground here, instead of the hard dried out ground of the Prairies in mid-summer.

I know soon that I will have to properly awaken, attempt to squirm into clothing in my sleeping bag, staying at a cozy temperature and then making that first brave movement out of the warmth. Donning my yellow rain jacket, an obnoxious article of clothing to walk in the small gap between my tent and my neighbour’s to turn left and walk down the path which quickly changes into boards (so we are not quite so uncivilized) to the fire, covered by a shelter that is extended by a tarp, grab breakfast and sit on one of the crowd of benches and chairs.

Follow this path back and on my right I will see the square Rubbermaid containers, a blue one and a white one, that almost always contain dirty water. Sixteen people digging in an assortment of sediment cannot hope to keep water clean.

Further along is the large, rectangular canvas tent that consists of our camp laboratory. Contained within are collections, a microscope, and additional toilet paper, amongst other things. If I continue along this path, I will reach the road, which the Americans call a “street”, a strange term I think as it is in fact the Alaska Highway. One of the first days, a group constructed a marker of sorts—three poles tied together, like the start of a tipi, with orange flagging tap that flies with the wind. But if I am not to cross the road, I can go left, and this is the path that passes where the grouse laid her eleven eggs and the van, containing all our items that are scented are stored. The van that drove us up here and will presumably drive us back. Past this is the “red box of hell”, as Colin likes to refer to it, the outhouse, a necessary place to visit but somewhere that is avoided at almost any cost. Within hell, a quote on the wall, Einstein, or a poem that Amandolin and I painstakingly copied and yet somehow managed to still make look messy—fitting for the surroundings.

A few metres south of the red box is the deepest excavation unit within the field camp, one that was a test of the pit crew who dug it, who willed it to produce one artifact and has produced only a razor blade and a collection of small animal bones. Neither are of particular interest but were celebrated nonetheless. Further south is my pit crew’s excavation unit, of a lesser depth but of more archaeological importance.  Here we have lamented out of frustration, bickered, rejoiced over finds, and swatted at the ruthless, continuous cloud of mosquitoes.

A small unit is east of ours, and beyond that, the “Pit of Despair”, deep and with plentiful paleosols. South and east of my crew’s unit, there are a few shallow pits. Here many flakes have been found but they are within the end of their units, having hit moraine and unable to proceed downward. These units are near a cleared area from which low, tree covered mountains carve the sky. A pier projects off the hillside—a perfect place for watching the sunset.  A path near the pier supposedly runs to the creek of which a sliver can be seen. Another path to that same sliver of reflecting light goes by the red box. Both must cross through the muskeg—round mounds stick up and look like something out of Dr. Seuss. A few large trees are interspersed. But if I head back here at the end of the day, to the pier, it is a perfect place to watch the sunset. The sun pierces its way through the birch, orange and pink often crop up above the horizon and subsequently begin to fade. And though the sun hangs there, barely below the hillside, it still marks the end of another day.
Posted by Kalista at 14:17